First off, props and a big thank you to my brother in arms, ShakeNBake, for doing the number engineering on this and making me look like I know what I'm talking about. And another thank you to @8_Hussars (again) for proof reading this and double checking my work in case I go full retard.

The Primary Qualification (i.e. Commander, Driver) works separately from the rest of the skills. Changing the tank assignment has no* effect on crew skills. All numbers, except where noted, represent the amount of Crew XP that is lost when retraining for Credits (not the Free) rather than Gold. Retraining for Gold is always 0 XP lost.
One of the few occasionally I'll actually cite the wiki:
http://wiki.wargaming.net/en/Crew#Training_and_Retraining_in_the_Major_Qualification

Retraining for Silver is entirely doable (especially within classes). The losses are extremely small AND(!!!) you can cheat the system a few ways as well.

EX:
If you have a US TD crew (say a 25/2) but don't own a US premium TD (and I don't blame you. I hate the scorp.) but you have a US premium Heavy, say a T34, you can retrain the crew to the new US TD (28 proto) and then grind the primary exp in the T34. You lose out on some of the accelerated benefits for being in the same class/type but not all of it and your crew exp continues to build at half rate in the premium, plus you get to pull in a few creds as well!
http://wiki.wargaming.net/en/Crew#Bonuses_and_Penalties and scroll down a bit:

The thing to remember is that you have to have the new tank unlocked to retrain the crew to it, but you do not need to buy it (unless you really want to)

Skills count from a different pool of XP than Primary Qualifications. This pool can get huge at 3x+ crew levels. On your third skill, getting from 87% to 88% takes almost 22k XP*. Resetting skills for Credits loses a flat 10% off of the total XP (not just that skill, in total) in the crew exp pool. At (3)87%, the total skill exp pool is 1088K XP. A skill reset for credits of your 3 skill crew loses 109K XP. (218 games worth of exp @ 500exp/battle)

Remember, you lose a crapton of exp per silver retrain. How much is 21k exp? about 42 battles worth. (averaging 500 exp/battle) or an average of 5 hours of playing that tank only. (7 mins a game averaged)
If you notice, that's the LOW number for silver skill retrains. 42 battles is barely tolerable to get back to where you were. After that, the losses are simply staggering. Into the hundreds or maybe thousand(s) of battles.

How much XP is worth 200 gold is a question everyone will have to answer on their own. Personally, I do the first skill resets (I actually train 2 skills, then reset  to what's needed. Except the commander for 6th asap.) and same class retrains for credits. Everything else is gold.

Either on a Premium Tank, or a normal tank that you have completely researched (Elited!!!), There is a small check box above the crew members that will allow you to double the exp that 1 crewman gets. It automatically goes to the person with the LOWEST TOTAL EXP, not the lowest Major Qualification or even crew skill. This lucky person gets double the amount of Crew exp than he normally would INCLUDING (and this is cool) any modifiers like personal reserves. ACT does this by taking the exp that the 'tank' gets (its how you unlock modules and the next tank etc) and giving that exp to 1 crewman.

How much crew exp does he normally get?
The amount of Exp it shows you on either the 'detailed results' breakdown, or the "personal achievements" on the after battle screen(s).

However, Checking the ACT box will prevent you from stockpiling exp on that tank to convert later to free exp with gold (if you like to do that, me not so much.)

Which Brings us to...

If you ever played D&D then this makes total sense to you. If you didn't, then welcome to Weird Math 101.

All the Bonuses are Additive, not Multiplicative. <--------- Remember this.
So you would think that with your 2x daily multiplier and a 200% (2x) experience personal reserve and a 200% (2x) crew exp personal reserve running that you would get (2x2x2)= 8x Experience from your first win?
Lolnope.
You get 4x.
Here's why. The bonuses don't stack. Each one individually sees the base Exp (from the personal results or details screen remember?) and does their own action to it. So the daily double does its thing and the personal reserves do their thing. But they never see each other and the base exp only counts once and then they all get added together.
The short version:
TotalCrewmanXP = [earnedXP*(crewXPMod+(firstWinMod-1))]*[1+Accel]

ok, lets expand it a little:

Clear as mud? yeah I thought so.

To make it easier, subtract 1 from the bonus and add it to the other bonuses to get what you are actually seeing.

Let's make it a BIT more obvious.
WG is doing a 5x month and is running a 3x crew exp weekend and you pop a 2x personal reserve. you get 8x exp for that 1 fight.

Neat! Hope that cleared some of the mud out. If it didn't please ask questions below!


*(Both stars) After retraining the Primary Qualification, the XP that would have been between the 87% and 88% skill mark, some amount less than 22k, gets dropped to the primary qualification. Your third skill will remain at 87% and your primary skill will increase.
ex:
You had 18K (90%) of 22K(100%) and retrained in-class. Your primary qualification would now be 94%; 39K XP lost to the silver retrain, 18K gained in Primary Qualification from the skill reset. Please note that you have to retrain the skills to get the exp in a skill to funnel back into the Major Qualification crew exp pool, even if you have a bunch of exp in a skill slot that you haven't chosen yet.

To say it avoiding math: Primary Qualification is a small pail with some water. Skills are a huge bucket of water. They aren't connected at all, but if you get a cup and scoop some out of the bucket into the pail, it will fill up. The cup is what kind of retrain you are going and how many holes/leaks it has. (lots of holes for Free, a few holes and cracks for Silver and no leaks at all for Gold)

Graphs for the number shy:
Exp required for each skill level: 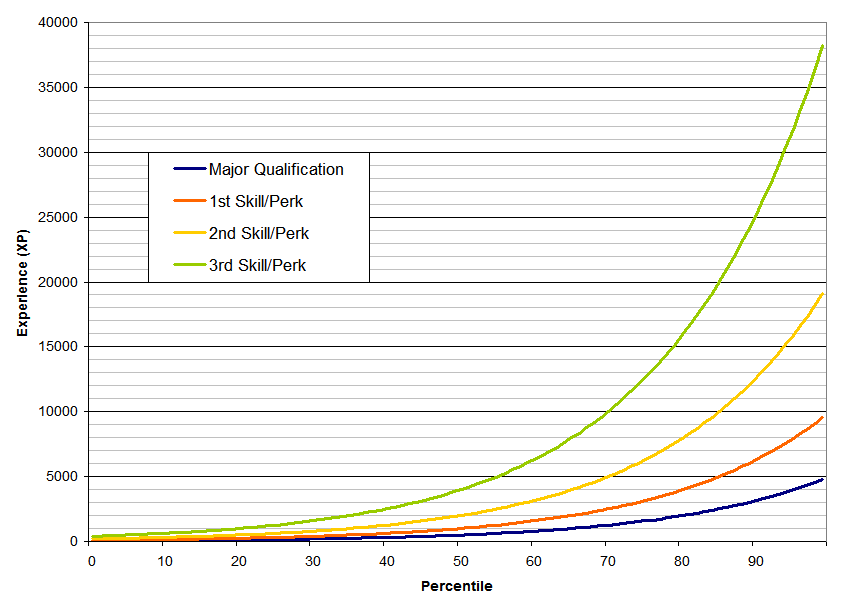 or, for the whole thing: 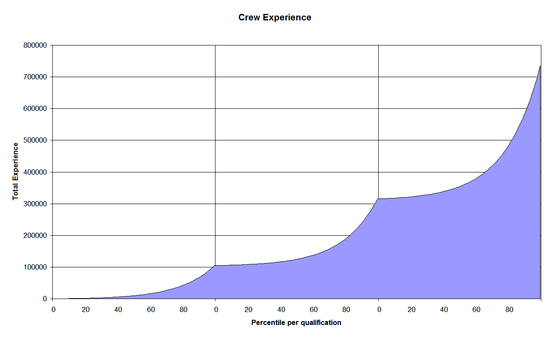 TL;DR:
Do yourself a favor and retrain for gold after skill 2. Wait for sales if you must. Play in weekend/weekday warrior tournys if you need some quick small gold.
If gold retrain isn't an option at all for you, Please ask anyone (make a thread, google search the wotlabs forums, status update, post here, anything.) about the way to grind the skill order without retraining (it can suck, esp with perks, but it's doable and more exp effective than silver retrain in the long run)