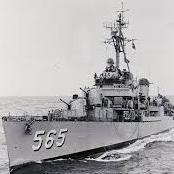 Invisa-firing; is it a thing? a meta? or hype?

By EliZacharias, October 20, 2015 in World of Warships Metagame Discussion