By RichardNixon, May 27, 2016 in Metagame Discussion

What numerical value should WN9 use for players who currently have ~2500 WN8?

Can we make purple really bad and dark red unicum if only for a month? I want to see everyone flip their shit and confuse the XVM sniping arty fuckers. 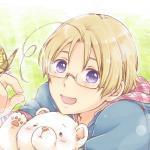 an asymptotic curve to X3N4

Ok, I've got nearly enough material together to launch WN9, but I need to make final decisions on a couple of aesthetic questions. Please read the explanations before answering the poll. Numerica