looks pretty high up there on the ugly o meter 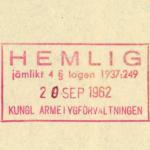 No need to go all sp15 on us, strv 74. Chill. With tanks that have existed in reality, they actually care a lot about getting things right. I've spent a time poking around the development documen