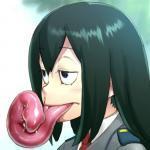 Ahoy, matey! I'm no pirate, but salutations from a tanker of *the* SEA!

By ChromeTurret, January 15, 2017 in Newbie Palace and New Users Introductions