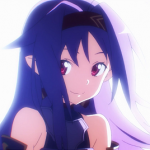 I have previously made a post HERE about Chinese TD leaks almost a year ago, but despite the leaks coming from KZW's official account (the company running WoT in China) not much information was provid